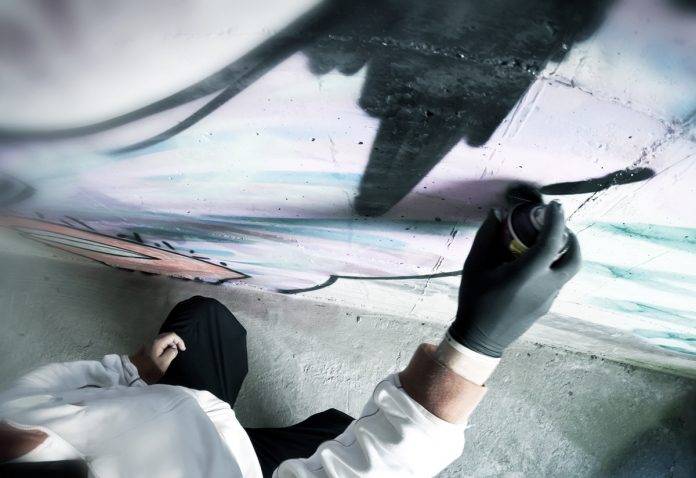 It was one of Victoria News’ more interesting headlines: “Greater Victoria Crime Stoppers looks for swimming graffiti tagger.” A young man was spotted on a surveillance camera swimming to a beacon near the Johnson Street Bridge and tagging it with spray paint.

The incident was just one of the latest in what’s set to be a record year for graffiti vandalism in Greater Victoria. By early fall, the Downtown Victoria Business Association’s (DVBA’s) Clean Team will have cleaned as much graffiti as they did in all of 2018 when they removed 10,445 tags. And that’s just graffiti the Clean Team sees or finds out about in downtown Victoria. The problem extends to all corners of the region.

Most of the graffiti is tagging, where vandals use spray paint or markers to scrawl their “signatures” on everything from walls to freight trucks. Much of it is inane, but a recent spate was far more disturbing. In July, painted swastikas began appearing on walls and bus shelters in the city.

Experts agreed that any graffiti, from the inane to the hateful, must be removed fast, because graffiti is a lot like mold. If you don’t clean it up right away, it spreads and spreads and eventually can lead to deeper problems, a theory confirmed by a 2008 University of Groningen study in which Danish social psychologist Kees Keizer set out to answer the question: Would people exposed to bad behaviour also behave that way themselves?

In an alley where a sign warned against graffiti, Keizer attached fictional flyers to handlebars of bikes parked there and watched as people returned to their bikes. When no graffiti was present, most people took the flyers with them; just 33 per cent threw them on the street. But when Keizer covered the wall in graffiti, 69 per cent threw the flyers on the street. In another experiment, he wedged an envelope holding a visible five euro note into a mail slot. When the mailbox and the ground around it were graffiti-free, 13 per cent of passersby stole the envelope. But when the mailbox was covered in graffiti, thefts doubled.

Jeff Bray, executive director of the DVBA, is seeing red over the huge increase in graffiti in Victoria, and his organization is taking action, working diligently with VicPD and Crime Stoppers to catch the perpetrators, most of whom are known to police but are difficult to catch in action. To help collect evidence, the DVBA plans to work with property owners to install security cameras.

Bray says aside from making the city feel unsafe, graffiti is costly for homeowners, businesses and taxpayers. The City has one full-time position entirely devoted to removing graffiti. And it’s not always easy. Some if it has to be painted over, and the really tough stuff requires toxic chemicals to remove it so there’s an environmental impact. Plus, there’s the damage to the buildings, some of it permanent. A heritage building in Waddington Alley was recently vandalized by a tagger, damaging the bricks.

While some argue that graffiti is art, Bray doesn’t agree. “Would it be acceptable if, instead of tagging a building, someone threw rocks at its windows? No, it’s the same thing. It’s criminal.”

Oh, and that swimming graffiti tagger? At press time he was still at large. Take a look at the Greater Victoria Crime Stoppers website. He might be someone you know.


This article is from the August/September 2019 issue of Douglas.