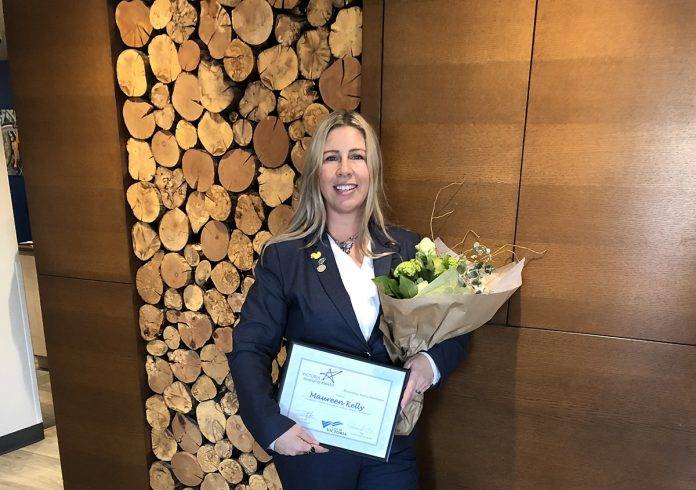 Maureen Kelly, GM of Access Inns is the latest recipient of the Victoria Hospitality Award, which recognizes those in the local hospitality sector who go the extra mile in customer service. Maureen’s nomination came to us from Russ Priestley of Nanaimo, B.C. who said:

“Both my wife and I are retired/semi-retired healthcare professionals. I spent 15 years working critical care. I had wandered back into our room while my wife finished a phone call, and then stood up with a drink in her hand to her mouth. She stumbled and crashed onto the ground. The screams had me out of the room in a flash and then back in to gather large towels. What she had done was create a ‘Joker’ type smile, to her face with the rim of the glass. Now broken it just missed her eye and her glasses probably saved it from going into her eye. This occurred due to no fault of the facility or company. My wife was unstable on her feet due to her health and simply stumbled.

I have experience with worse disasters but from an objective front line healthcare provider view. This ranked as one of the worst events I had directly seen, and objectivity becomes hard when it is your own family. I had only just gotten towels to my wife’s face to help stop the serious bleeding when Maureen, your General Manager Generator of Awesome, took complete control. I still see her coming out of the office with medical supplies in hand yelling for an ambulance to be called as she took over the situation. Urging me out of the way. It was with great composure and control that Maureen and our second angel Marnie, a guest of the hotel as well, took full control of the situation talking gently with my wife while cradling her face in towels. The ambulances arrived in a short time, that seemed forever, one after the other, three in total.

Maureen’s and Marnie’s composure and ability to take control of a situation, that was dramatic, was outstanding!! Maureen is to be commended by me, who has worked in Emergency in dramatic situations, and should be commended highly within your organization for going above and beyond!

I also want to thank another frequent guest of the hotel who facilitated a ride to the hospital for me. I unfortunately forget his name due to the night, but I know he was a Seaspan Engineer with an Italian Mastiff. The assistance that Maureen and the office staff provided while I was at the hospital was also outstanding. I received a text about 10 pm
that they had taken our small dog out for a walk and then into the office for a visit. By the time I returned they had returned our dog to her crate. Again above and beyond the call of duty for what I have come to expect.

My wife has had her stitches removed, roughly 40-50 that were visible. She has recovered well from this event and still remembers the soft voices while she was inured even though she could not see anyone at the time.

Thank you to everyone involved and I highly recommend your hotel now.”

Congratulations to Maureen, for going above and beyond in hospitality and creating an exceptional experience for her guests.

What is the Victoria Hospitality Award?

Committee members meet once per month to review ballots and select that month’s winner. The winners receive a signed Victoria Hospitality Award Program certificate, a letter of commendation, a City of Victoria pin engraved with the winner’s name, and numerous other gifts from Committee members representing various sectors of our community. There is a special event hosted annually to celebrate the nominees and monthly winners.

The nomination ballots can be found online at Tourism Victoria and on the Victoria Hospitality Awards website.

This news release is from December, 2019