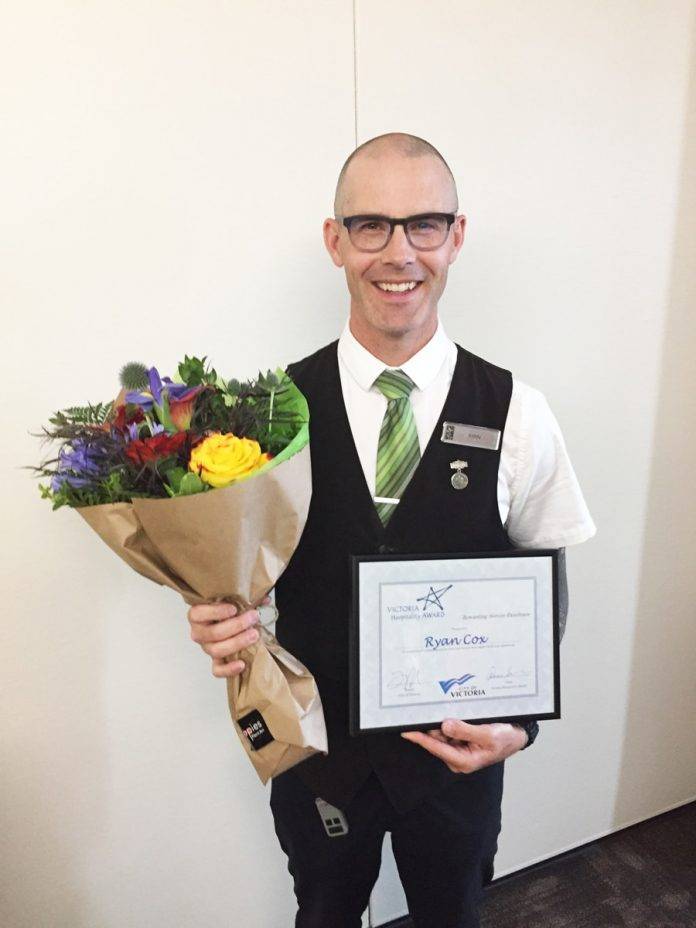 The Victoria Hospitality Awards committee has recognized Ryan Cox from the Inn at Laurel Point for his outstanding service and willingness to put guests first, even on his own time.

“I would like to nominate Ryan Cox who is one of our bellman at the hotel. As long as I have known Ryan, he has always gone out of his way for guests, staff and visitors to the hotel.”

“As many people know, our hotel is a very pet friendly hotel. We get to meet many dogs staying at the hotel and also some local dogs who stop by for a treat. We had a local Golden lab named Sunny who used to stop by frequently for treats. Sunny was always so excited to see our staff and most especially getting his treats! Unfortunately Sunny was put down just recently because of health issues. His owner stopped by the hotel to give thanks for all the love and treats we gave Sunny. They were visibly upset about the loss of their beloved Sunny but also excited about the upcoming marriage of their son in the U.S. Ryan asked when they were flying out and it was very early on a Friday morning.”

“Ryan ended by driving them, on his own time, to the airport at around 4 a.m. on the Friday morning. I have never know any colleague that would go out of his way in such a manner. I am very proud to have Ryan Cox as one of my colleagues! He is one outstanding individual!”

About the Victoria Hospitality Award program

Committee members meet monthly to review ballots received and to select a winner. Monthly winners are presented with a signed Victoria Hospitality Award Program certificate, a letter of commendation, a City of Victoria pin engraved with the winner’s name, and numerous other gifts from Committee members representing various sectors of our community. The Society hosts a special event annually to honour all nominees and monthly winners.

Nomination ballots can be found online at Tourism Victoria or at victoriahospitalityawards.com.