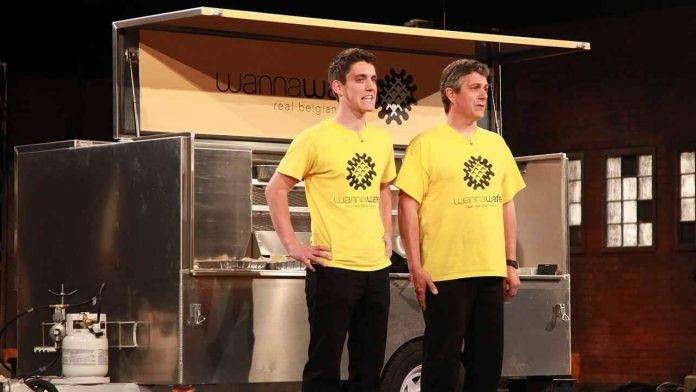 Decamping at Parkside Victoria Hotel and Spa on Friday, May 6, for three days of training, the people who will help take the waffle-cart brand national are very similar to the ones who started it; they are families.

Doug Schneider of Calgary was an IT consultant before hearing about the waffle company founded by Belgian immigrant Renaat Marchand with help from his wife Krista and their children Arno and Dana. Like thousands of other Canadians, it was Renaat and Arno’s appearance on the hit CBC TV show Dragons’ Den that sparked his interest in the company.

“I had been looking for a mobile food product to take to the Calgary market,” he tells Douglas. “The hamburger, hot dog, and sausage carts were all there. This was new and different, and [the franchise] was a low outlay of cash for a quick return — no muss, no fuss.”

He was watching the Marchands’ segment on Dragons’ Den along with his son, D-Jay, who is finishing high school and interested in business, specifically a career as a software engineer. D-Jay agreed to put his plans on hold for a while if they were selected as a Wannawafel franchisee.

“I was attracted to the idea as a fun, family-building experience,” Doug recalls. So, with D-Jay in the fold, “I said, ‘OK, let’s do it.’”

Mark Bach’s story is similar. Although holding down a steady job in aircraft repair and maintenance for the likes of WestJet, the Kelowna father was on the road a lot and wanted more time with his family. So along with daughters Jayme, 18, and Annette, 15, he applied for a Wannawafel franchise — again, after seeing Renaat’s pitch to the Dragons. “He just melted everyone’s hearts,” Bach recalls.

Jayme has worked at McDonald’s and a local grocery store in Kelowna, and would like to start her own business someday, so the partnership with dad is a launching pad for her aspirations. Annette, meanwhile, is in it to raise money for her school’s cheer team, but business experience is business experience. Who knows where it will take her?

For now, she and her sister say they are eagerly looking forward to selling Wannawafel’s renowned Liege waffles at summer festivals and other outdoor events around Kelowna. “There’s nothing like being your own boss!” says Jayme.

Emma Csak, however, has by far the most unusual back-story of the bunch. A chartered accountant with a Ph.D. in international relations, she immigrated to Canada from Hungary in 1993, but despite her background, during the past few years she had been struggling to make ends meet, delivering newspapers in a beat-up old car to support herself and son Adam Daniel.

Csak, 52, thought her student-loan debt and lack of reliable transportation would make her the longest of long shots for a Wannawafel cart, but she wrote a business plan, anyway, and with the help of the Halliburton County Development Corporation in Ontario, she secured financing for the $60,000 required for the franchise. She also obtained a loan for a new car, which she and her son drove from Peterborough, Ont., to Victoria in just under four days.

Csak, who has baked as a hobby for many years, says she saw in Marchand “an honest man, an honourable man,” and knew she wanted to be a part of Wannawafel.

“When I saw Renaat on Dragons’ Den, I was just so excited. The Dragons were all over [the product] and those people are not easy to please, so I was sure the product was good. Working with a man like Renaat … that is just like winning the lottery.”

As she told her story to Douglas, she served Hungarian-style cherry pie, one of the many snacks and desserts she had baked and frozen in advance to save money during the drive across Canada to begin her new career.

Before Wannawafel, she says, “I thought I didn’t have any chance to have a decent life or make a decent living. This has been a life-changing event for me.”

Csak is already anticipating her new life as an independent businesswoman. “I want to buy a second cart,” she says. “They gave me a big area, so I’ll need a second cart. It will be long days, 7 a.m. to 11 p.m., but that is the advantage of the mobile cart. I can start somewhere in the morning, go somewhere else during the day, and then maybe to a music festival at night.”

She’ll start out with help from her son, but wants to hire up to 10 people.

“It will take lots of organization,” she admits, “but even though I am 52 years old, I still have a lot to offer!”

Farm in a Box: Topsoil shifts from producer to consultant

Catch the Wave: The Future of Hydropower on Vancouver Island

More Money for More People – Mining the Potential of Bitcoin

Small Giants: How DHK Architecture stood the test of time on...