David Hahn is no mariner and makes no apologies for it.

The man in charge of the world’s second-largest ferry service was born in landlocked Buffalo, NY and has never been a boating man, a seafarer, or an old salt, although at 57, he’d hardly qualify for the latter. Asked if he even owns a boat, Hahn replies dryly, “Yes, 38 of them.”

The president and CEO of BC Ferries willingly admits it’s a rehearsed answer to a question he’s been asked plenty of times. But need a man running a fleet of ships be able to tip toe through the rocks and currents of the Inside Passage? No, but he’d better be able to navigate the hazards of the boardroom like a seasoned helmsman — which Hahn is.

Before taking the wheel at BC Ferries in 2003, he had accumulated 20 years of experience as a top executive with companies like rent-a-car giant Hertz, where he was director of marketing, and at the Ogden Corporation, a New York-based multi-billion-dollar conglomerate. Hahn was the chief operating officer for Ogden Aviation, managing 25,000 employees and overseeing airport operations in 30 countries.

Jumping ship into shipping hasn’t been all calm waters for Hahn. In his five-year tenure, BC Ferries has suffered some indignities — from the Queen of Oak Bay ploughing into the marina at Horseshoe Bay destroying 22 boats, to the Queen of Surrey fire, controversy over the new ferries being built in Germany, and, of course, the Queen of the North tragedy.

But the privatization of the 47-year-old company just could be working. Money is being spent. Terminals have been enhanced. New ships are plying the waters. There’s labour peace with the nearly 4,000 employees. Revenue in 2007 almost hit $600 million.

All that remains, it seems, is to bring back the beloved Sunshine Breakfast.

“I torture people with that,” jokes Hahn. “I keep saying we’ll bring it back for our 50th anniversary in 2010.”

Hahn seems pretty earnest when he describes the ferry experience as “one of the best entertainment rides in all of Canada.”

Hahn’s office in the Fort Street headquarters is surprisingly spartan. The walls aren’t lined with plaques or awards, nor with grip-and-grin photographs of ferry-riding celebrities. There are just a few knick-knacks on a little side table — and one of particular note. It’s a bobblehead doll that looks surprisingly like Robert Kennedy.

“Is that a David Hahn bobblehead doll?” I ask.

“Yes,” replies Hahn, so quickly that it’s obvious he doesn’t want to explain it. “And no, you can’t get those.”

What’s it like running a company where you’re under constant scrutiny from your customers?

It’s easier now than it was five years ago [when Hahn joined BC Ferries]. Things have settled down a bit. People have accepted some of the changes and we’ve established that we’re credible. For example, we’ve bought new ships, they’ve arrived on time, and they’re under budget. I think we’ve been pretty successful in that. There’s less controversy because we’ve shown we’re interested in doing the right thing.

Knowing that running BC Ferries could be like sailing rough waters, why did you take the job?

I went out on four or five different [BC Ferries’] sailings before I took the job. I saw something that was pretty great in the waters that we sail in, with our customers and our crews. All it needed was some rebirth or regeneration of what [former premier] W.A.C. Bennett first envisioned. We had to get new ships and get public confidence back. When I got here, people were still angry with the NDP and the fast ferries. People had distrust in the ferry corporation and its employees. I honestly thought, how much worse could it be? This is the best time to come in.

There are those who say you were handpicked by the premier to run BC Ferries because you’re good at restructuring, marketing, and growing revenue.

Handpicked? [Hahn shakes his head] No. I didn’t meet anybody from the minister of transportation’s office or the premier’s office until after I was hired. That makes it a little hard to be handpicked. I’m trying to give [government] exactly what they wanted — a fully independent company. That was the agreement. I wouldn’t have taken it otherwise. I wouldn’t have taken it if it were part of an influence package.

Do you measure success by the bottom line only?

I’ve got something like 22 performance measures that the [BC Ferries] board evaluates my performance on. Customer service is one. Safety is another. I would argue that we’ve spent money that was not scheduled, and sacrificed the bottom line because it was the right thing to do.

Do you listen to your critics?

Not too much. I listen to customers who write me letters. They’re the only critics I worry about. I get a lot of letters and respond to many of them myself. The letters [that arrived] when I first got here, the bulk of them were complaints. There are still complaints, but there are an awful lot more compliments about the staff. The letters are very respectful; I think that’s the biggest thing.

Are you a fan of government privatization of the transportation industry?

I think there are certain things government can do very well and things they cannot do very well. I would argue over the long run that transportation in North America, when it’s politically involved and competing with schools and hospitals [for funding], will always suffer.

How much responsibility for the community does a public-turned-private company have to have, especially since you’re a monopoly service?

Monopoly service, that’s the issue. I think we have a significant responsibility to be fair because of that monopoly… otherwise you jeopardize your monopoly and your public confidence will be at risk. We’ve done some things that were un-BC Ferries-like. We gave out $325,000 to 98 food banks. We’ve had free travel days. And we’ve made investments in local community events.

How do you treat passengers like valued customers rather than a commodity?

You make that mistake of treating anybody like a commodity — you’re dead! Forget the service side of customer service — you’re dead! You get lazy over that and you’ll lose everything.

How did the sinking of the Queen of the North personally affect you?

There’s only one issue there. It was extremely sad that two people lost their lives. That was it. Everything else can be replaced.

Will we ever see a return of downtown-to-downtown passenger-only service?

I’ve always liked it — that’s all I can tell you.

What did you make over the flap about the removal of Queen Elizabeth’s portrait from the interior of the new ferries?

I didn’t care about it one way or the other. There was no master plan to take the photographs off the ships. It happened by default. Nobody came to me secretly and said ‘We’re taking the picture of the Queen down.’ I was thinking it would be good to have some kind of photo up there, maybe honouring our soldiers in Afghanistan.

What do you think about reduced ferry fares for British Columbians?

I’ll reverse what you’re asking. We’ll charge higher fees for non-British Columbians and put [the money] back into the company. I think, down the road, I would do it, but it’s a more complex issue than it appears on the surface.

Do you enjoy having a high profile and being in the public spotlight and, perhaps, under public scrutiny and sometimes at the centre of controversy?

I don’t mind handlin
g the business issues. It can be a little more difficult for my family at times than for me, but I don’t let it bother me.

When you were working for Hertz, the company pitchman was O.J. Simpson. Who would make a good pitchman for BC Ferries?

How do you relax? I hear you’re pretty good at golf.

I don’t know about relax [Hahn laughs]. I’ll go out for dinner with my wife, play golf… and work. I don’t mind working. When I was eight years old I used to make a ton of money shovelling snow. In Buffalo, there’s a lot of product.

You lived and worked for years in the fast pace of New York City. Do you find the West Coast lifestyle a little too laid back for conducting business?

Do you ever NOT wear a suit?

Sure, Fridays we go to casual. During the summer we go to casual every day except when we have people from the outside coming in for a meeting. Then we dress up as a show of respect.

How do you balance being a CEO with being a family man?

You’d have to talk to my wife. You’ve got to take time off when you need to, but when I’m off I’m never really off. That’s a personal flaw, maybe. Some people are on all the time and some are the opposite. I just happen to be in the “on all the time” column.

What don’t we know about David Hahn that you’d like us to know?

I think the thing people should know is that I actually have a lot of fun doing this. I think it’s one of the best jobs to have in all of Canada. 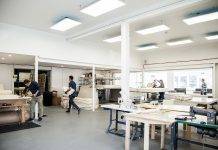 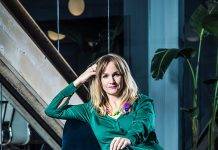 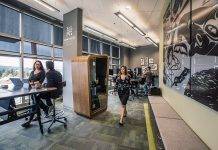 Songhees Innovation Centre is a Hub for Indigenous Innovators