While the 2000s saw large amounts of growth and development in the many Greater Victoria municipalities, Esquimalt was the exception. Since then, Esquimalt council has taken steps to attract businesses and developers. The Esquimalt Town Square project by Aragon Properties is the first sign of success for those initiatives.

“Partly because of [the project] there has been a lot more interest in Esquimalt, so we’ve had other projects come forward,” says Barb Desjardins, mayor of Esquimalt, noting in the past four years the municipality has started to build 1,400 units of housing. “That’s a significant turnaround from a community that didn’t bloom in the 2000s when everyone else did.” Desjardins says tax incentives like the Revitalization Tax Exemption Bylaw, which incentivizes development near Esquimalt Road, contributes to the recent growth.

Luke Ramsay, development manager for Aragon, says council had approached several development companies around five years ago for a request for proposal for the site and the developers saw the appeal of the location which already has a grocery store and community centre. The only thing missing was medium-density residential units, which is what this project will bring.

The first phase of the project is slated for completion in spring 2020, with the next three phases scheduled to be complete by the end of 2020. The full project will bring an additional 50,000 square feet of commercial space, 68 residential units and 34 rental units.

Chris Edley, president of the Esquimalt Chamber of Commerce, says this is a welcome start to the township’s downtown boom.

“There’s a number of other projects that are already approved by council that are just a little bit behind this one,” Edley says. “This is the beginning of a small tidal wave of activity that’s going to bring a lot more people to this downtown area.” 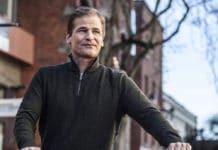